The committee looked at five new planning applications. We will object to one of these: for 25 new rooms at the Carlton Hotel, North Bridge on top of the existing roof. We felt this was inappropriate in the world heritage site and would have an adverse impact on views from Salisbury Crags and Regent Road.

We spent some time discussing another planning application, for small bronze plaques to be installed near the war memorial in front of the City Chambers to remind people to be respectful of the memorial. We understand the plaques are to be engraved "remember" and "respect". We can see why this proposal has been made, although it is sad that it is necessary. But we wonder whether the choice of words will achieve the desired effect. We will not object to the application but we will write to the Council with our concerns.

We were pleased to note that a retrospective application for approval of changes to a shop front in the Grassmarket was turned down and that enforcement action is to be taken. The Council Officers' report on the application included the following: "fascia lettering on listed buildings should be individual and hand painted. The letters will be raised, they are contrary to non-statutory guidance and are not acceptable. The proposed LED spotlights are a visually obtrusive addition to the listed building ... flags are contrary to non-statutory Guidance for Advertisements ... hooks on the fascia detracts from the character ... The proposal as a whole represents an incongruous addition to a streetscape...". These comments address several issues which have concerned the Association for some time. Let's hope this represents a new, tougher approach by the City Council.
We were also pleased to hear that the Brownlee Old Town Trust funded Lego sets at the Children's Library are a hit. We heard that on one mid-week evening which would normally have been pretty quiet 18 children and 16 adults attended and there was a real buzz about the library. 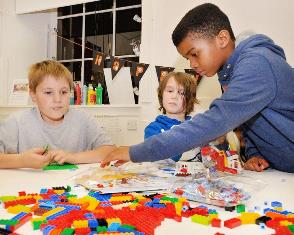